No Travel Time Charge Within:

Sometimes, small investments can prevent a very expensive emergency in the future. Here then is the story of one of those investments.

These valves were installed in a mobile home in Eugene. They provided hot and cold water to the washing machine, and were nicely tucked behind it–out of sight, out of mind. They were original to the house and the builders who used them probably saved at least 40 dollars in parts installing them. Of course it’s something they could do because it’s not their house to worry about in the future.

Case in point, the valve on the right failed spectacularly in the middle of the night. The handle and plastic packing nut blew completely off. It took some time for the home owners to discover what had caused the loud popping sound and it wasn’t until they walked past the closed door of the laundry room and felt the hot water soaking deep into their hallway carpets that they realized how bad their problem was. After a panic and further delay locating the water shut off valve, they ended up with about 75 gallons of water in their house. It soaked their entire hallway and living room carpets. When we arrived, a clean up company was already present, sucking what water they could out of the house and removing the carpets from the floors.

We pulled back the washing machine to expose the culprit–cheap plastic shut off valves. Upon removing the walls, we found that the builders had installed good quality pex piping behind the wall, but to save money they went cheap with the valves. We replaced both valves – the hot side valve always fails first because it wears faster, but the cold side is never far behind. We installed two new valves that were made of heavy brass. Total parts came to about 50 dollars. It took us less than an hour to install the new valves and to hook up the pex piping behind the wall. 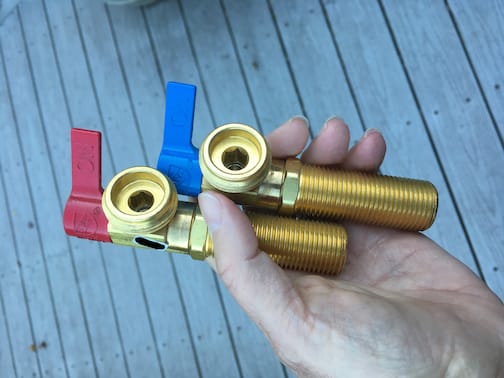 This would be the last time for many years the home owners would have to worry about the valves behind their washing machine, though sadly it was too little, too late to prevent their current damage and discomfort. As the cleanup crew started to set up drying fans and dehumidifiers, we realized it would take weeks for their life to return to normal. Everything that can’t be dried will have to be replaced–walls, carpets and floors. Weeks of the house filled with construction debris and rehab equipment. And months of dealing with insurance.

One of the most expensive parts of building a home is the plumbing and, unfortunately, it’s also one of the biggest areas where some builders and manufacturers will try to save money. As this story shows, it’s often smart to bite the bullet and install quality parts in the first place! Oh, what time and money an extra 40 dollars from the builder would have saved this family!