No Travel Time Charge Within:

What is trenchless pipe boring? 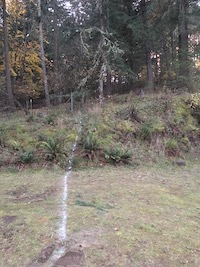 We recently had a project that required us to run 300 feet of 1” PVC schedule 40 electrical conduit pipe up a hillside into the trees. Nobody in the company wanted to hand dig a trench several feet deep up that rocky, volcanic Oregon hillside. We could have used our excavator, of course, but it would have been difficult if not impossible to maneuver it through the trees. Thankfully, we didn’t have to attempt either method. We called our favorite directional pipe boring crew, they showed up one morning, and by that evening we had the pipe run up the hill, the low-voltage wire connected, and the holes covered again. Nice job, guys!

This is the story of that project, as an example of what could happen the next time you need to replace your water service or run a new pipe in a difficult place. 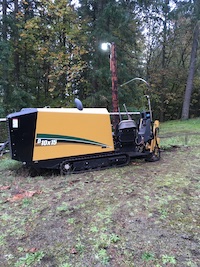 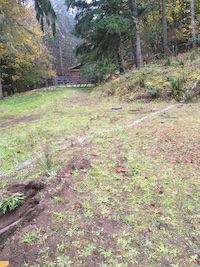 The directional boring machine (sometimes called a trenchless boring machine) is a large, trailer-mounted unit. You can see the boring line as it enters the ground here. That line uses high-pressure water and a drill-head to excavate a tunnel underneath the ground. The depth, direction, and distance of the tunnelling are controlled by the operator and monitored by the crew up the hillside, following along as the drill works.

At the other end of the run, we dug a hole 4 feet deep, a foot in diameter, where we wanted the new pipe to terminate. This crew knows what they’re doing, their drill hit that hole dead center!

Once the tunnel was run, we attached our PVC pipe to their drill-head, and they pulled our pipe back thru the tunnel to the original hole. Or, at least that’s what was supposed to happen! In this case, something went wrong and our pipe snapped off. (We suspect it hit some colder ground and the chill made it brittle.) 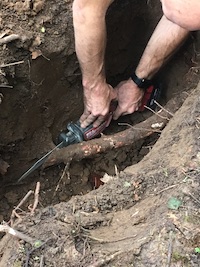 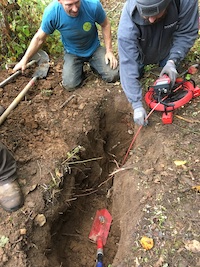 Well, that’s annoying, but it’s not catastrophic. We dug another hole where we thought the broken pipe was, found the tunnel, and ran a locator down to find the pipe. (We were very close!) Then we pulled the broken section of pipe out of the ground, replaced it and finished the job. That glitch took maybe 90 minutes–still much faster than if we’d hand-dug the entire line!

And as a bonus, you can see an an example of the kind of tree roots we would have been digging through for 300 feet, if we’d tried to hand-dig or use the excavator for the entire line. We’re so glad we didn’t have to!

A directional boring machine doesn’t always work–some areas are just too rocky, for instance. But when it does work, it can save a lot of time and back-breaking work. In this particular case, we were running low-voltage electrical conduit. But we routinely use this system to run new water lines under driveways and expensive landscaping.